The Egyptian corps of engineers Brigadier-General Hasem Said Helalle declared at the opening of "Safety Route" combat engineer competition that Russian equipment is up-to-date and perfect. 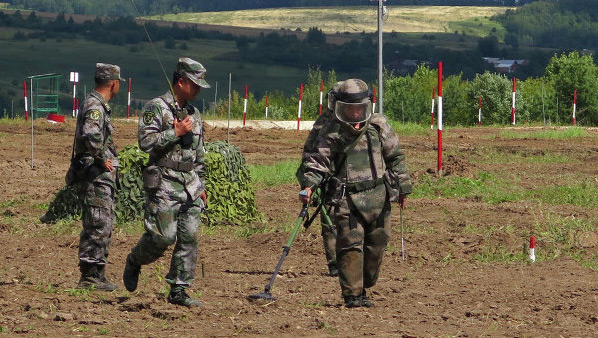 Lieutenant-General Jury Stavitskij — the commander of Russian corps of engineers reported earlier: Russian technicians are training their Egyptian colleagues to operate Russian military hardware that was granted for the A/M events with the prospect of equipment export in the sequel.

"There is a great benefit in this events participation and the possibility to test Russian military hardware that we didn't use before. And, certainly, a skill sharing will take place between Egyptian and Russian crews. These tools do really represents a perfect equipment" — stated Egyptian Brigadier-General.

"As a matter of fact an extremely little time remained to the final point of the Games and during that period we'll try to train adequately to get maximal experience to perform hard and with dignity. Russian team is using these tools for a long time and we saw their craftsmanship. Nevertheless, we'll try to compete adequately with our Russian colleagues" added the General.

In a "Safety Route" combat engineer competition that had started on the August, 4 in Nizhny Novgorod region, besides Russian sappers combat teams from China, Byelorussia and Egypt are assisted.

The contest is carried out at the Tashlykovo firing ground (Kstovo-town) on the 500m path. Every team performs as a tank column path support squad. Squad composition: sappers unit, power-operated bridge unit, engineering engine crew. The contest final will take place on the 12th of August.